Google Maps
General Description
Inquiry Print
Thailand is a Southeast Asian, predominantly Buddhist kingdom almost equidistant between India & China. For centuries known by outsiders (farangs) as Siam, Thailand has been something of a Southeast Asian migratory, cultural & religious crossroads. Thailand has an area of 517 000 sq km, making it slightly smaller than the state of Texas in the USA, or about the size of France. Its shape on the map has been compared to the head of an elephant, with its trunk extending down the Malay Peninsula. The centre of Thailand, Bangkok, is at about 14 degrees north latitude, putting it on a level with Madras, Manila, Guatemala City and Khartoum. 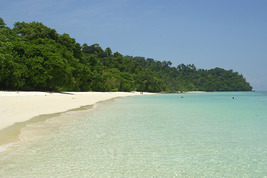 The country's longest north-south distance is about 1860 km (1155 miles), but its shape makes distances in any other direction 1000 km (621 m) or less. Because the north-south reach spans roughly 16 latitudinal degrees, Thailand has perhaps the most diverse climate in South East Asia.

The Gulf of Thailand coastlines form 2710 km (1683 m) of beaches, hard shores and wetlands. Hundreds of oceanic and continental islands are found offshore on both sides of the Malay Peninsula and those with tourist facilities constitute only a fraction of the total.

Cultural background
Many festivals are linked to Buddhist or Brahman rituals and follow a lunar calendar. New Year, Songkran, is celebrated in mid-April by 'bathing' Buddha images, paying respects to monks and elders by sprinkling water over their hands, and generally tossing a lot of water in the air for fun. Expect to be soaked unless you want to party-poop in your room.

The sowing and harvesting of rice has given rise to a cycle of festivals. To kick off the official rice-planting season in early May, the king participates in an ancient Brahman ritual in a large field in central Bangkok. A Rocket Festival is held in May in the country's north-east, using a volatile mixture of bamboo and gunpowder to convince the sky to send rain for the new rice season.

The rice harvest from September through to May leads to joyous local celebrations throughout Thailand. The Vegetarian Festival in Phuket and Trang, during which devout Chinese Buddhists eat only vegetarian food, runs for nine days from late-September to early-October. Merit-making processions are the most visible expression of this festival, but there are also ceremonies at Chinese temples.

The Elephant Roundup in Surin in November is a festival popular with the kind of people who enjoy watching giants play soccer. During the Loi Krathong Festival, held after the rainy season (usually in November), candle-lit floats are cast into waterways to bring good fortune for the coming year.

Thailand, like other Asian countries, has been influenced by contact with foreign cultures. However, the never-changing character of Thai culture has remained dominant, even in modern city life. Often depicted as fun-loving, happy-go-lucky folk (which indeed they often are), the Thais are also proud and strong. The pride of being the only SE Asian nation to have resisted European colonization is self evident and deeply ingrained in the national psyche.
Inquiry & Booking
Thailand
Diving
Country information
How to get there
Travel hints